Today I entered 6 categories and got prizes in 5! Yay!!
There were some lovely flowers, vegetables, crafts, baking and floral art and the childrens section had great collections of seeds, wild flowers, herbs, mini-gardens and vegetable animals!! Chewbacca makes a winning gingerbread character…

No, not a nickname given to a certain housing devlopment built in the late sixties/early seventies. Although from a stylistic point of view it might be easy to represent in this medium. These are the results of my late 2009 glue fixation 😉

please note: The folowing was prompted by an accidental viewing of Mister Maker when rescanning the telly for the digital switchover.

Starting with the underpinnings of flattened out book delivery covers, crisp tubes with lids, empty (and so far uneaten) muesli box, chosen because of the roofline,  and for the main building- a good plain box with an opening lid. 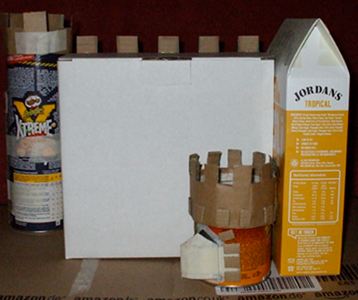 Moving on to the first decorative phase and the application of a good few coats of plain white acrylic over wrinkly tissue paper for the rusticated effect. I liked this look but it was to be a gift for a wee girl  so I kept going. 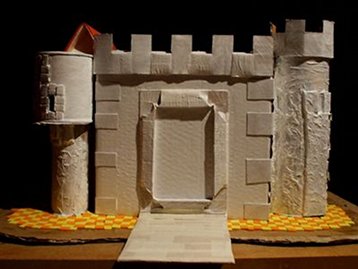 Finally I settled on yellow after trying beige and pink and added a few wee sparkly bits and greenery. I did remember to add chains for the drawbridge but it didn’t move as well as expected. The surprising thing was how useful craft foam was for roofs, cobbles and grass! The inside of the main building is lined with coloured paper. It opens at the top to house little people or dragons or trebuchet and seige equipment.

This was not the end though. Having eaten all those crisps there were two wee tubes left. Towers! Little free standing Rapunzel enclosures, the pink one has a lifting off roof/lid the other has a base/lid with a push led light inside. Just poke your finger in the door and press down. 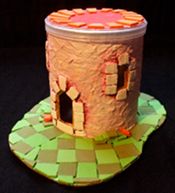 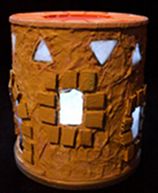 p.s. I am a bit off Pringles for the forseeable future!